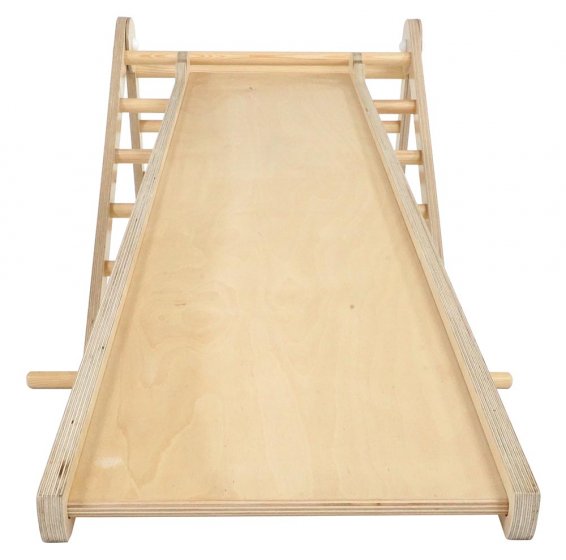 Please note that this product is the slide only, designed to connect to a Triclimb triangle or an Archi rocker which are sold separately.

Expand the play possibilities of your Triclimb triangle (sold separately) with the reversible Miri slide and climbing wall. Miri aims to provide the opportunity for safe and self-paced exploration of body and mind. This Miri Version 2 has an enhanced joint system which is integrated into the side rails improving the aesthetics and simplicity of the system.

Miri connects to your Triclimb safely using the unique Trifix system that quickly and easily locks Miri into place in seconds without the need for any tools. Miri is reversible! One side features a smooth flat surface that can be used as a slide or a ramp. The other side has indentations allowing it to be used as a climbing wall for little ones but also a ball run with the addition of Miri Sticks (sold separately). Miri can be fixed onto any of the Triclimb rungs altering the angle and thus varying the difficulty or fear level making it suitable for children of all ages.

Please note that "patches" and "beam lines" in the wood are normal features. Triclimb uses plywood because of its unrivaled strength and stability. Patches are where a knot has been removed from the plywood sheet and replaced with a piece of wood or "patch". Beam lines are a natural feature in the production process caused by knots in lower layers of the plywood.

Miri is safe, stable, strong and fully tested as a slide, ramp and climb wall up to 100Kg weight limit. Triclimb and Miri create a solid platform that opens up a world of play possibilities at a pace that is dictated by your child.

TriFix Joint compatible. The Miri slide has fixings at the bottom that allow the addition of the TriFix joint sold seperately. When a TriFix joint is added to the bottom end of the Miri you can then connect a Triclimb frame to both ends of the slide creating additional play opportunities.